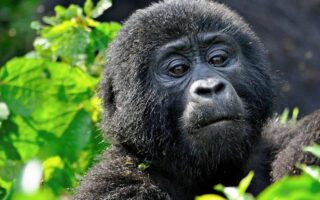 When one thinks of the democratic republic of Congo the only thing that crosses their mind is the insecurity but there’s more to the country than just the insecurity with the rich bio diversity that will persuade you to hop on your next flight to take part in a Congo safari.  With the most affordable rates that you can get, let us make Congo safari quite memorable by visiting the different destinations   at the cheapest rates you can come across. The democratic republic of Congo is among the most beautiful countries in Africa and the world at large with rich equatorial rainforests, a number of natural minerals like gold, diamond, a number of water sources and land forms like lake albert, lake kivu, the Virunga mountains, river Congo among other attractions that you should not miss out on.

Interesting about the orphanage is the fact that it acts as a rehabilitation centre for distressed gorillas whose parents were killed by smugglers and poachers and in a way the orphanage has helped the orphans to survive the harsh wild conditions by giving them a second chance to life and when they are ready to be released back to the wild, they are released so visit the orphanage and get to take care of the orphans for a day by bottle feeding them among other rewarding activities you can engage in
when it comes to the primate safaris in Congo theirs is more to be explored with a number of different primate species like the chimpanzees as you visit Lwiro chimpanzee sanctuary, take part in chimpanzee trekking in Virunga national park, you can also explore the Albertine endemic monkey species by taking part in golden monkey trekking in Virunga national park.

For hikers, mount Nyiragongo should not miss out on your safari experience while you visit the country, the mountain is among the eight Virunga mountains in Africa but interesting about it is the fact that it has the world’s largest lava lake and when you make your way to the summit of the mount you will get to see lava boiling in the crater lake from a viewing point, in Virunga national park you can make your way to the Tchegera island where you can blow off some steam by taking dips in the water as you observe astonishing views of the Virunga mountains in the country.

Because of the political instability of some parts of the country a number of tourist attractions are inaccessible but the ones that you can access like Virunga national park, Lwiro chimpanzee sanctuary and kahuzi biega will give you the utmost adventure without having to worry about their safety because of the top notch security that is offered at the different destinations. Look through the different safari packages below and let’s make your wildlife dreams come true by taking part in the Congo safari.

Our customer support team is here to answer your questions. Ask us anything!
👋 Hello, I am here to help you
Chat with Us